The PocketBook InkPad Lite is a rare specimen: With it’s 9.7 inch E-Ink screen, it is a large-format entry-level eReader for around 200 Euros.

But that low pricepoint comes at a cost: The display only has a resolution of 150 ppi.

Let’s have a closer look to see if PocketBook has made the right choice by using a low-resolution display.

The InkPad Lite uses a new design language, which heavily leans towards high-end tablets and smartphones. The frame around the device looks and feels almost like aluminum, but is actually made of plastic. It’s just extremely well done and feels nice to the touch.

The backside on the other hand feels cheap in the first few moments handling the InkPad Lite. But the ribbed plastic helps tremendously in providing a secure grip for device, which weights 366 grams. 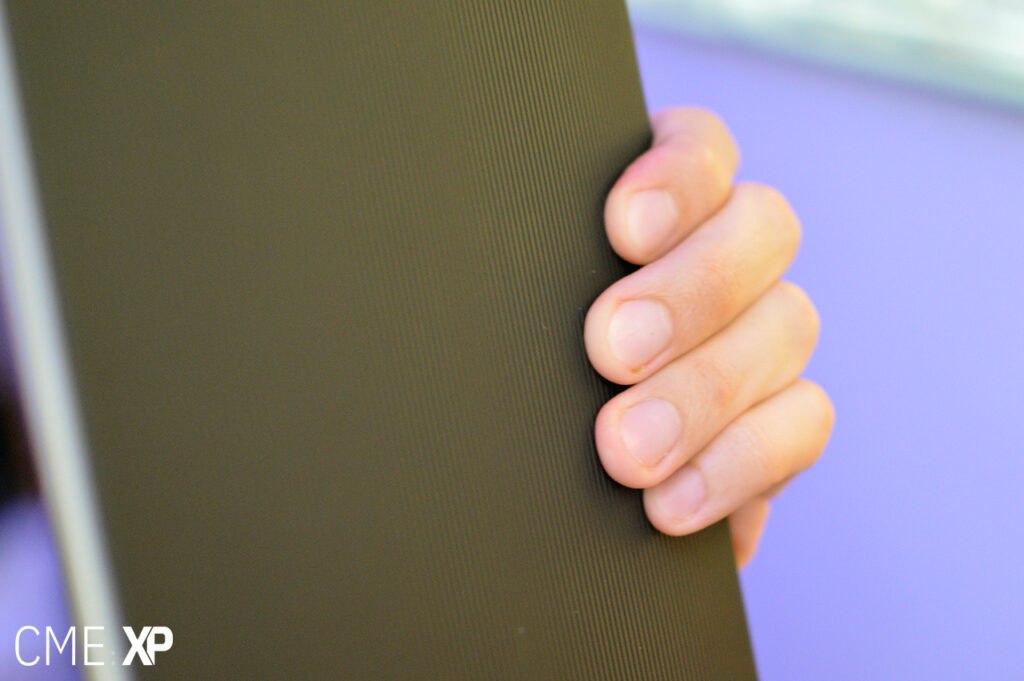 It’s not heavy, but not lightweight either. For comparison, the PocketBook InkPad X with a 10.3 inch E-Ink mobius display weighs only 300 grams.

Sure, the bezels are huge, but they provide so much surface area, so it’s really easy to hold the InkPad Lite without touching the screen. But here lies my biggest complaint with the build as well: The plastic around the display is a fingerprint magnet. After a few touches there are so many smudges, which makes it look messy.

Two other things to mention: The InkPad Lite has hardware buttons, which I always love in having in an ereader. The default functions can also be reassigned. 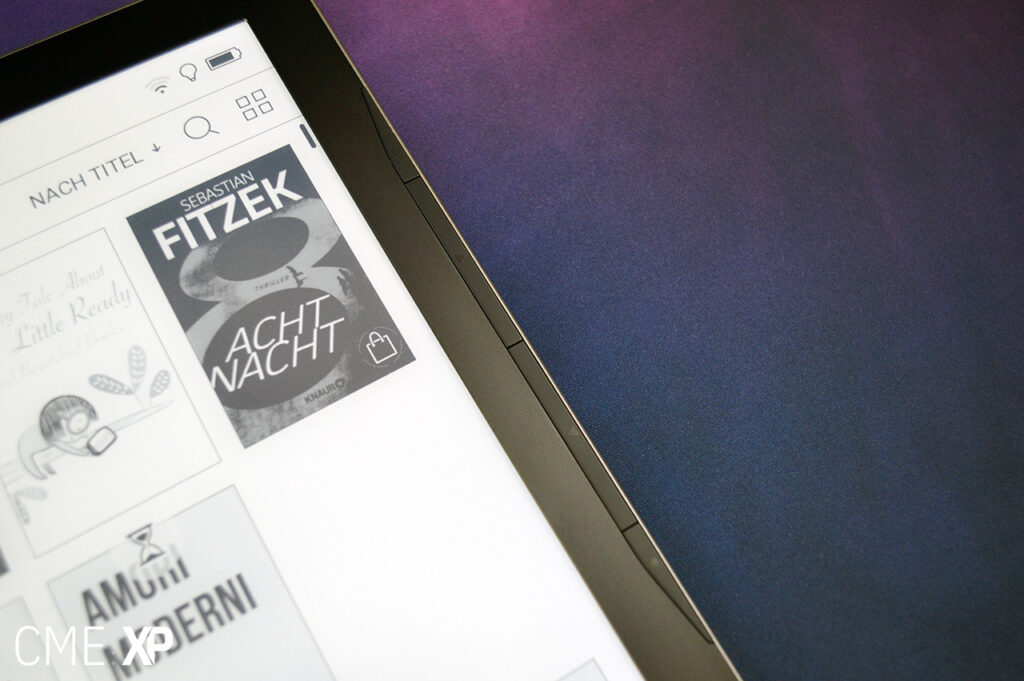 And the InkPad does have a MicroSD-card slot, which is not seen that often anymore nowadays. So, you’re able to expand the 8 gigs of internal storage.

Oh and it also uses USB-C.

The PocketBook InkPad Lite has a 9.7 inch E-Ink Carta display. Like I mentioned in the beginning, the low price comes at the expanse of the screen resolution, which is only 1200×825 pixels. That translates to only 150 ppi.

That’s extremely low for an E-Ink device. For comparison: Most 10 inch devices have around 227 ppi and almost all small-form-factor ereaders, like the Kindle Paperwhite, offer 300 ppi, exactly two times as many pixels per inch. 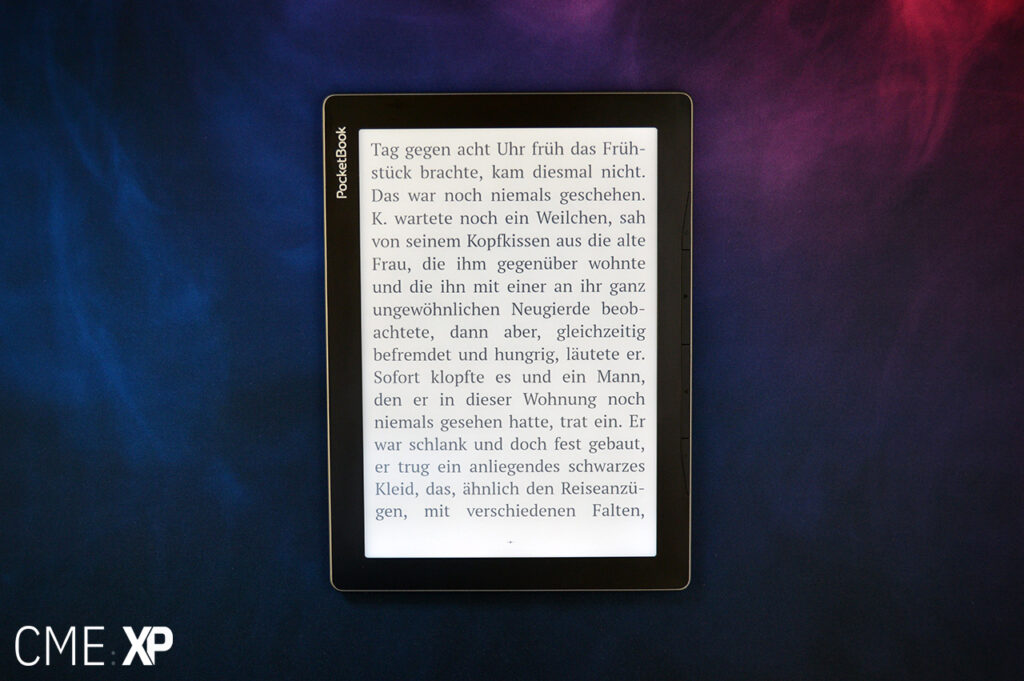 So does it hurt readability? It depends.

Yes, because you can clearly see the lower screen resolution.

No, because it’s only really noticeable with smaller text sizes.

That means, depending on your preferred usage the lower pixel density can be an issue, doesn’t have to be. 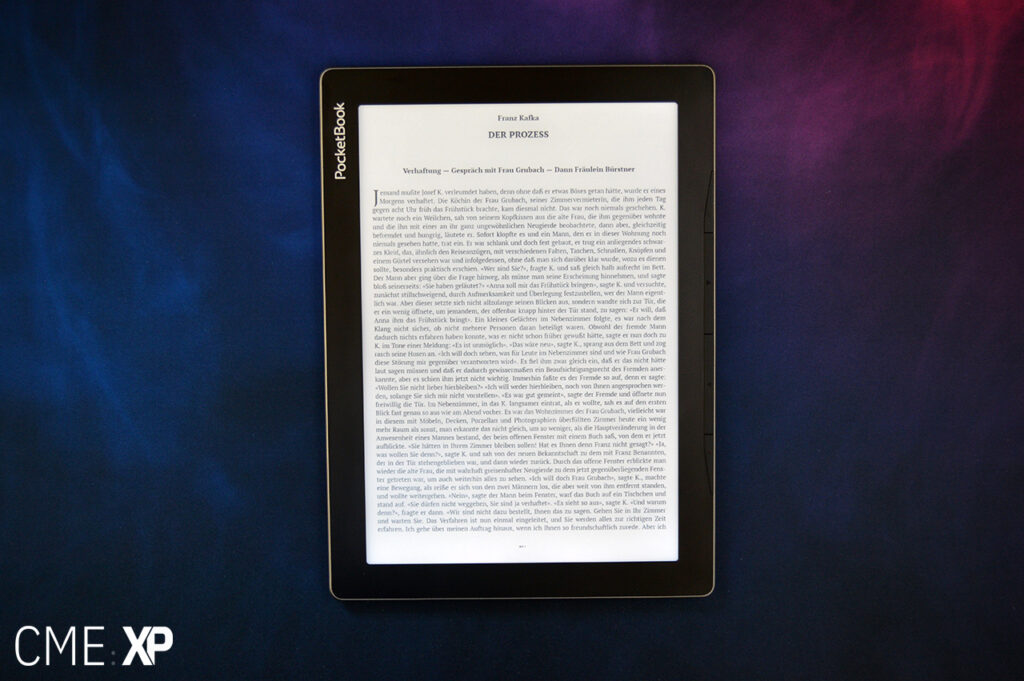 Contrast levels on the other hand are fine, which is no surprise because of E-Ink carta technology.

Luckily PocketBook decided to also include color temperature adjustment for the inbuilt frontlight. That’s something I personally don’t want to miss out on anymore, because I feel it provides a much better reading experience in the dark and at night.

The lighting quality is kind of a mixed bag. On the one hand the light color mixture works fine. There are no color clouds or other unwanted color effects when mixing the cold and warm LEDs.

On the other hand, though, brightness isn’t spread evenly across the screen. Especially in the bottom area you can notice there’s an issue.

I personally can live with it, because the rest of the screen looks alright. But if you’re the kind of person who looks for the smallest anomaly in frontlit devices, this can be a problem.

PocketBook uses a custom user interface, which over the years has been fine-tuned and optimized to a point where I feel comfortable in saying that it’s finally on the same level as Kindle, Kobo or Tolino.

It feels polished, responsive and intuitive, which wasn’t always the case in the past.

The homescreen splits into two parts: The latest books and the shop recommendations. 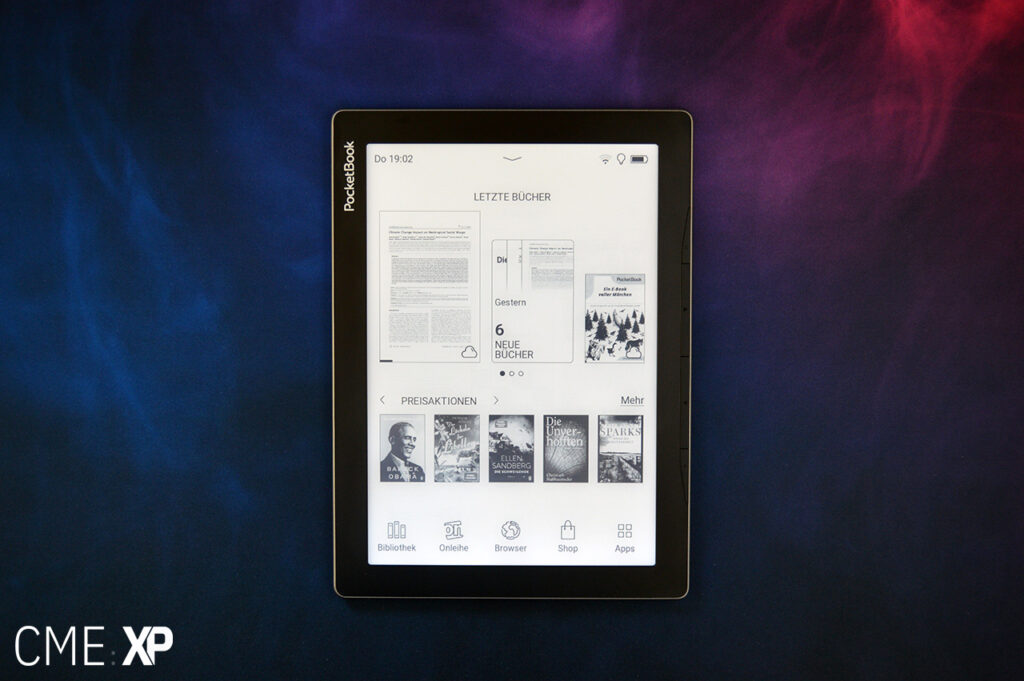 On the very top you can see the notification area, which can be opened with a click. There you get access to the brightness control and a few other options.

On the bottom you find shortcuts to the most important functions. This area is also adjustable. You can place your own shortcuts from the app list and remove others.

That’s generally something to keep in mind with the PocketBook software: Customization is actually very good for a dedicated ereader software. Usually only Android offers that many options.

Something to keep in mind is the scaling of the UI, though. PocketBook just enlarges the whole user interface for the big screen. That can look odd, because other large format E-Ink devices usually make more efficient use of the screen estate.

But it can be an advantage if you prefer large UI elements, because it makes readability and usability outside of a book easier. This can be especially useful if you have a strong visual impairment.

The InkPad Lite also supports auto rotating the screens content, which generally works well, but doesn’t when you disabled the inbuilt page numbering. Because when you do, the device calculates the pages based on your text size and screen estate. Rotating the device triggers that calculation, which seems to slow it down and worsens responsiveness overall. But that’s just a side note and good to know.

The ebook library is hands down the best you can get on an ereader at the moment. It offers so many filtering and sorting options, that I didn’t have any problems in organizing my ebooks. Even large libraries can be managed comfortably.

It’s also worth mentioning that you can either use the file system folder structure or Calibre tags to organize your ebooks. 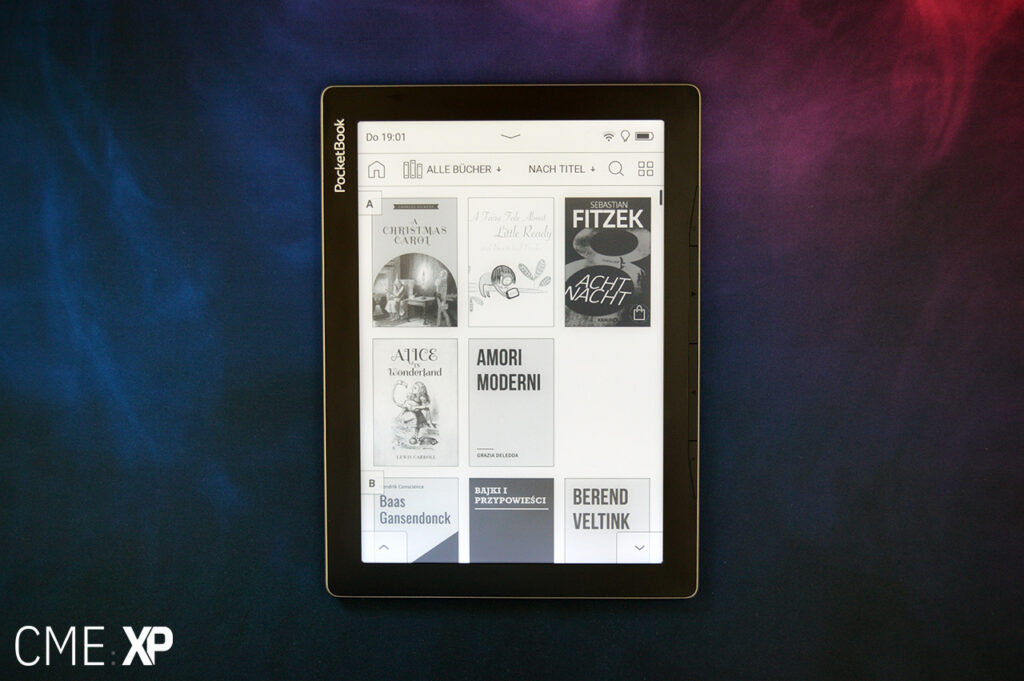 Notetaking is also done nicely and offers a few different options. You can take notes with the virtual QWERTY-keyboard or write handwritten notes directly on the page. Since the device only has a capacitive touchscreen, and not an inductive one, you can use your fingers, or need to get a capacitive pen.

The dictionary function is also quite extensive and offers a huge amount of freely available dictionaries to choose from. Way more than any other manufacturer. You can find the whole list in the description below. 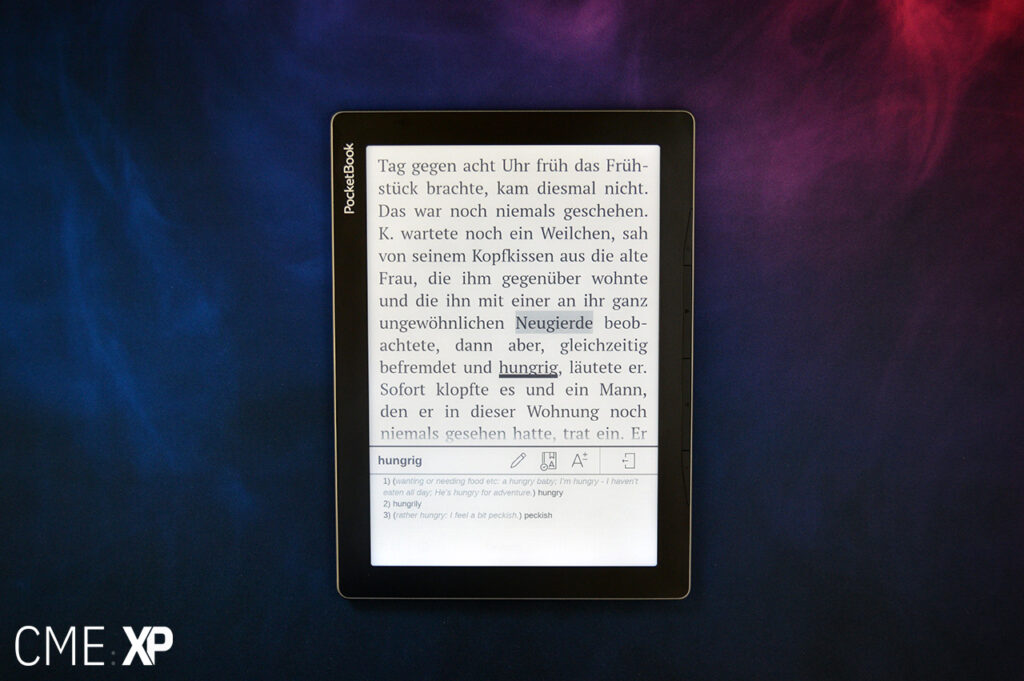 However my biggest issue with the dictionaries is, that they tend to recognize only infinitive words. You can edit the word you’re looking up by editing it, which is a useful workaround in that case, but I’d prefer it, if that wasn’t necessary.

Text styling inside a book can be adjusted in the usual ways, with size, margins, line-height and font type. You can also install your own font’s quite easily.

Using PDF files on the large screen are obviously a big selling point. However, you have to keep in mind, that the lower screen resolutions might be a problem here.

Depending on the type of documents you’re looking at, the text can look quite pixelated if it’s too small.  Don’t get me wrong – it’s not unreadable, but not very comfortable to read either.

So looking at large format PDFs adjusted for the InkPad Lite’s screensize might not work out too well. 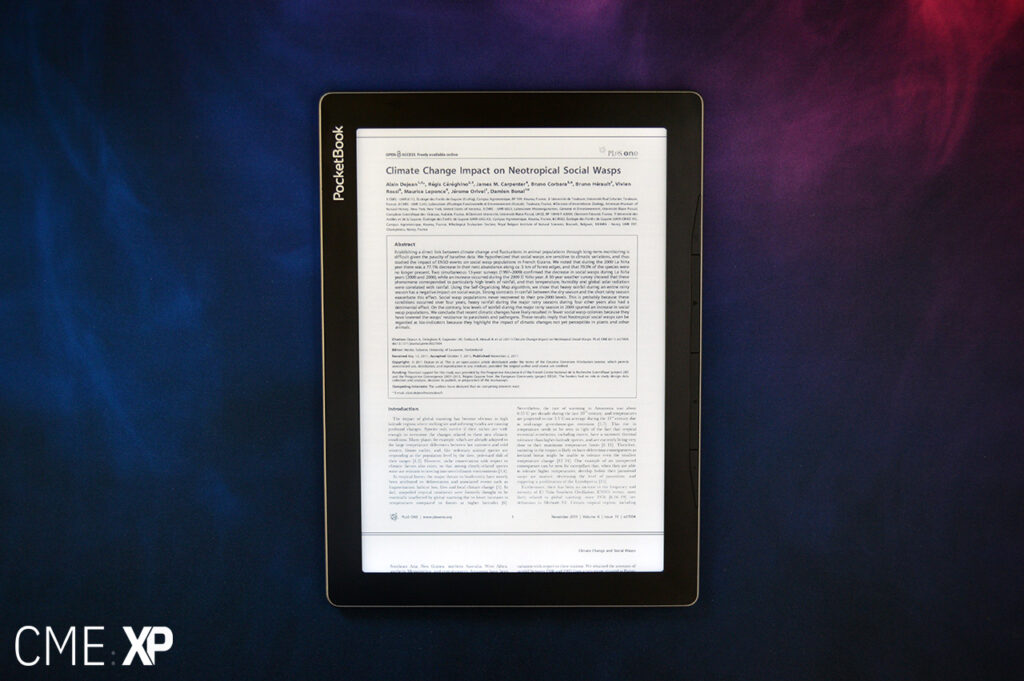 The best way to tackle that issue is to just simply zoom with pinch-to-zoom, or using the different PDF-modes that are available.

Those are not quite as extensive as on Onyx Boox tablets, but still best in class when only looking at ereaders.

So the default mode when opening PDF-files is the scrolling mode. As the name suggest, you can just scroll through the whole PDF-file vertically that way. And I was surprised that it worked quite smoothly even for more complex and larger files. 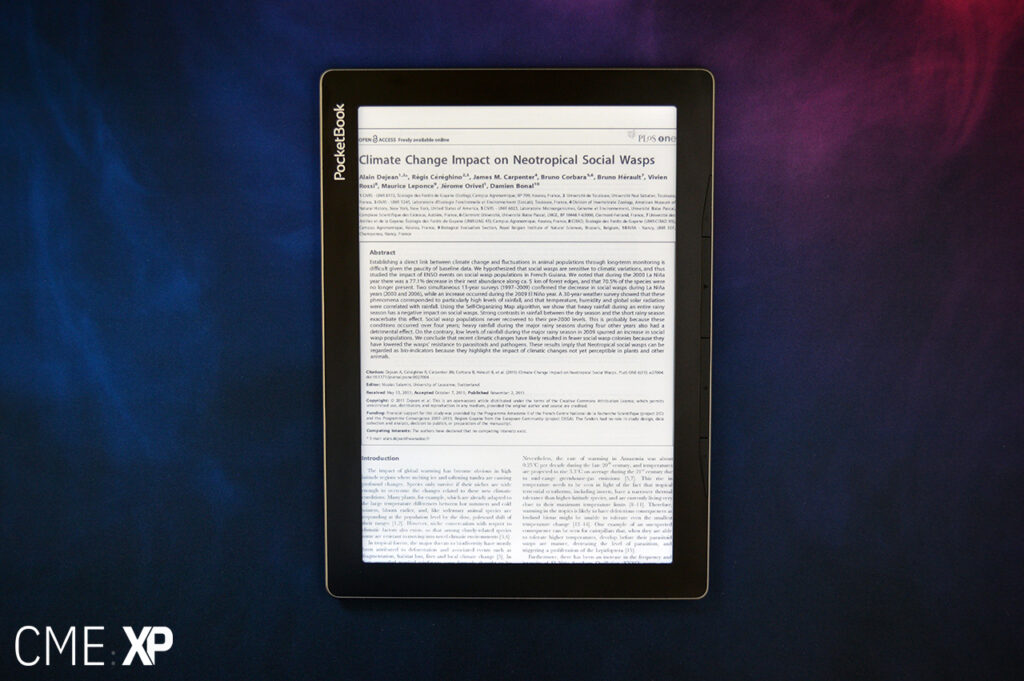 I often also make use of the margin crop function. That way you can just get rid of unused whitespace on the pages and zoom in on the content without actually losing anything. That works automatically or manually.

Another useful function is the columns-mode. Using it, will zoom in on one quarter or one sixth of the page – depending on which option you choose. The cropped view is then just advanced one after the other, from top to bottom, and then from left to right, until you reach the end of the page. This mode is extremely useful for reading scientific papers, which are often only available with a 2 column layout. 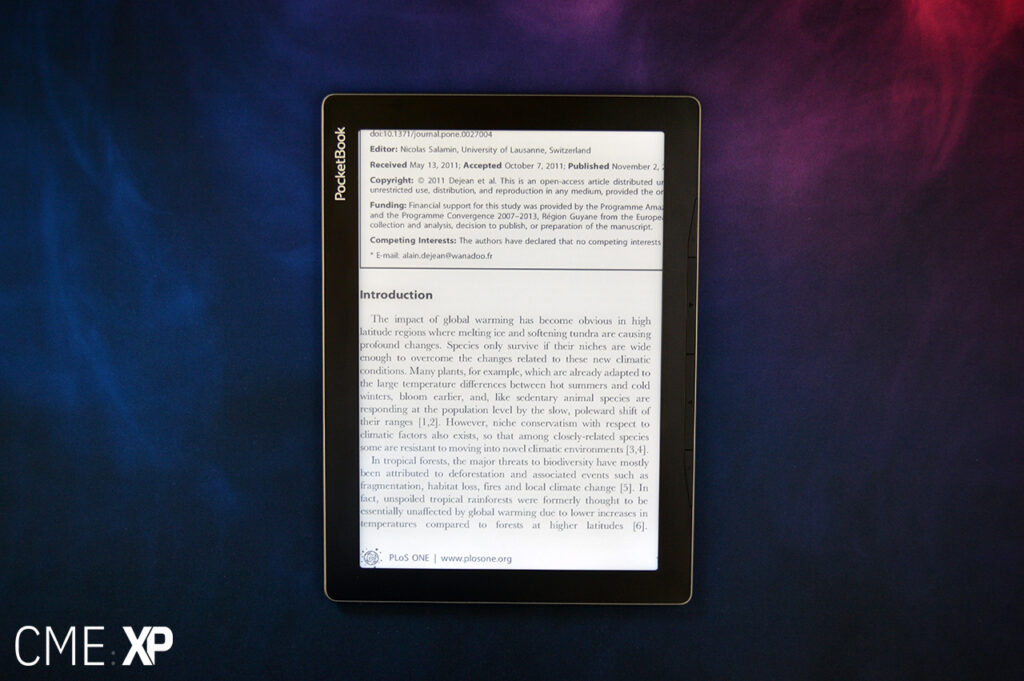 Using the columns-mode is usually enough to compensate for the lower screen resolution in scientific paper. If it’s not, you can also adjust brightness, contrast and gamma to make the text more readable or simply switch to landscape mode, which helps in zooming in even further.

Note taking works the same way as mentioned earlier – with the QWERTY-keyboard or by activating the handwriting mode to directly take notes on the page. But for that it makes sense, to use a capacitive pen, as the InkPad Lite isn’t compatible with WACOM-pens.

Notes made with the QWERTY-keyboard can be exported to an HTML file, handwritten notes can’t be. Those will only show up with a reference on where it was created, but not what was written on the page. 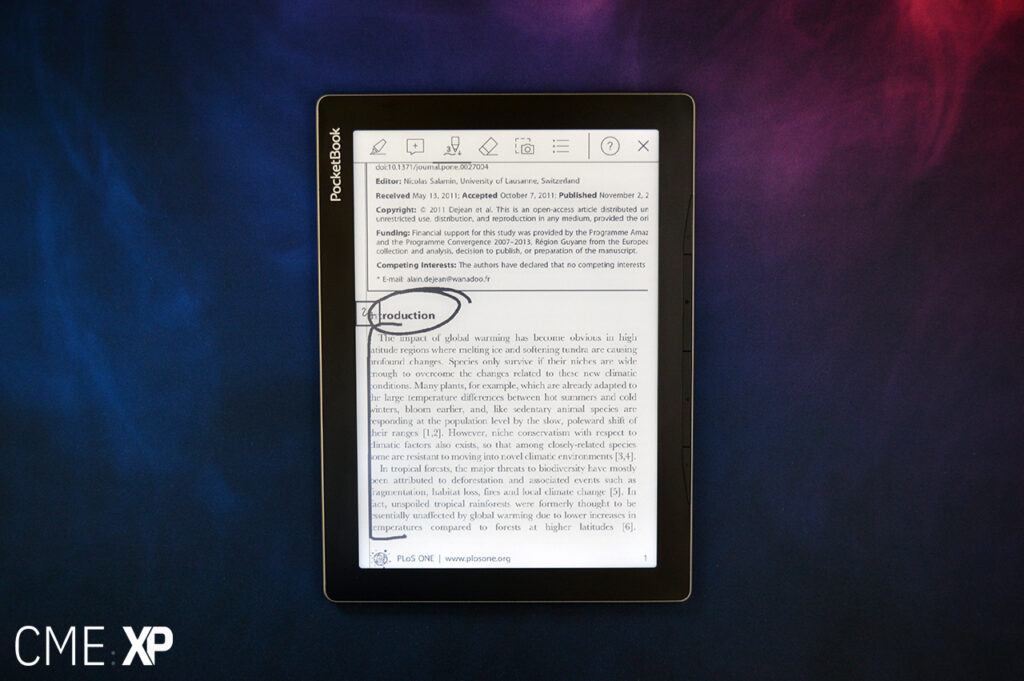 PocketBook has completely revamped the store a few years ago and also reworked the cloud integration. You now only need one account for both the ebook shop and the PocketBook Cloud. Each purchase is automatically synced with the cloud, which can also be access on a separate site on the web. 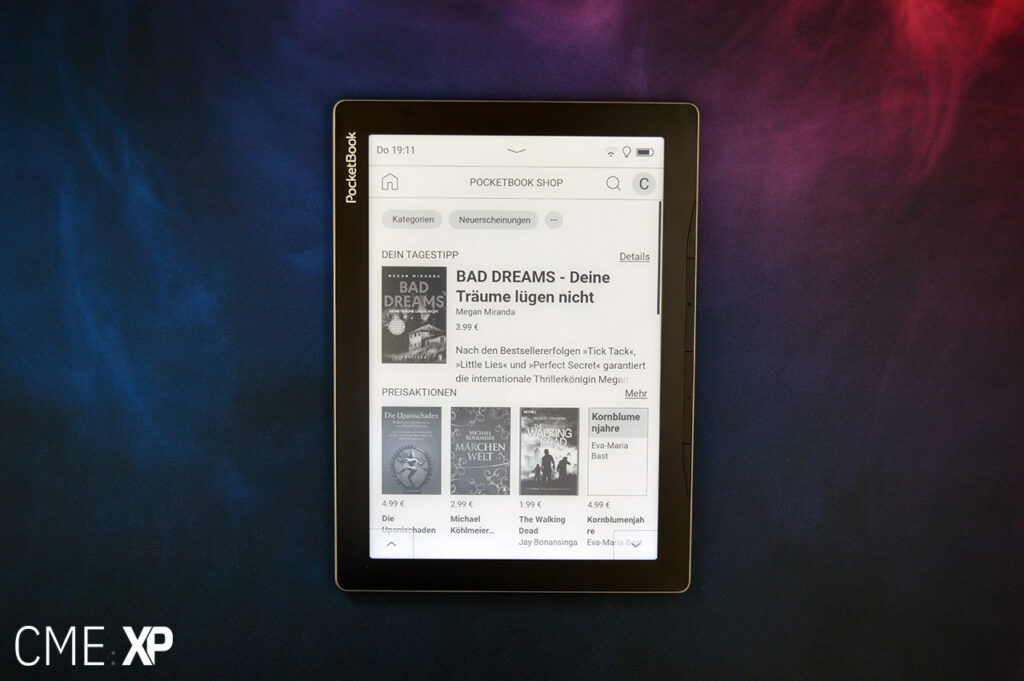 On the InkPad Lite you can download books manually from the cloud and can also push ebooks to the cloud. You get 2 gigs of space for free. Settings and reading status are also synchronized with the cloud service, which makes the whole process of switching between pocketbook devices quite convenient.

The only thing I actually dislike about the shop experience, is the search function. It doesn’t work too well and often shows my desired book on lower positions, instead of in the first spot, where it should be.

I was actually quite surprised about how well the PocketBook Inpad Lite performed in everyday use. Because of the low-resolution screen and the relatively low price for an ereader of that size, I thought its overall performance wouldn’t be convincing.

But I was wrong.

Despite the low resolution and the not so perfect light distribution, the reading experience is actually quite good. 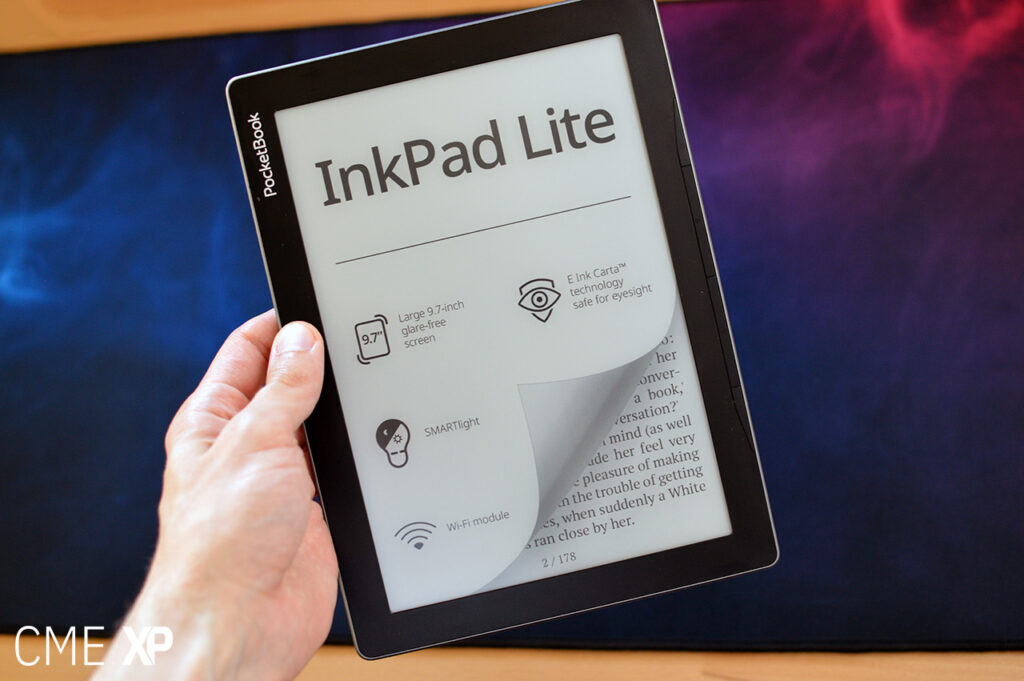 The pixel density is mainly a problem when viewing small text and isn’t that big of a deal otherwise. Of course, if you’re a pixel-peeper and are sensitive to pixelated items on the screen, the InkPad Lite isn’t for you. But if you’re looking for a large format ereader in the lower price range and are not too concerned about the resolution, I think you won’t regret in taking a closer look at the InkPad. 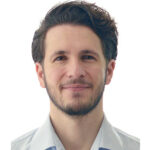 by Chalid E.
Out of enthusiasm for the technology, way before Kindle was launched in Germany, Chalid imported his first ereader from the US in 2007. Since then, he has tested over 100 eReaders from numerous manufacturers.
CME:XP › Review › PocketBook InkPad Lite: Is the 9.7 inch low-res screen good enough?